(Two days to go until the pass)

Manang is the teahouse village that everyone talks up from the get-go, “Just need to make it to Manang!” At the precipice of crossing into true high country at 3,540 meters, it is the designated spot to re-up your snack supplies, kick your feet up, relax for a day and attend the much-anticipated health seminar, which details harrowing stories of recent deaths by altitude sickness.

Cassandra, Trevor and I had opted to avoid the frenzied excitement of the Manang hub and instead chose holed-up in Bragha, just a few minutes southeast of Manang. We crossed through Manang just as the sun was rising against a backdrop of gloriously blue skies. Even the magical weather couldn’t successfully mask the humdrum of the Manang. It felt anticlimactic. I had imagined a popping little town… hell, they had a movie theatre! No, no, no. Manang was just as unimpressive as any other teahouse village. It felt dirty and overcrowded, not nearly as charming as Bragha. We did stop to buy some goodies: comfort chocolates and yak’s wool accessories to fight the icy cold ahead.

When we had retired the previous evening (our designated “rest day,”) my pain level in my achilles was high and my spirits were low. I was discouraged and unsure of how I would proceed if the pain did not subside. This morning began no differently.

I had ultimately decided to bite the bullet and began walking the day in sandals. I couldn’t muster the mental fortitude to pull my hiking boots over my achilles. The searing pain shooting up my leg was too much. I puttered along slowly behind my hiking partners, carefully avoiding puddles that would surely turn my toes into blocks of ice. After a short 30 minutes of walking, I realized it was not going to be feasible to walk the duration of our journey for the day in sandals. Not only was it a challenge to keep my feet dry, free of mud and not roll my ankles, my toes were freezing! While passing through Manang, I gritted my teeth and finally forced my foot into the boot. Yeowza!

After watching Trevor laugh and take photos in the middle of a goat stampede through town, we began the slow ascent up to Old Manang. It was a mild ascent and, yet, I was terribly out of breath- let the altitude struggles begin! It was challenging to breathe and my legs felt powerless. After a slow hour of climbing, the trail began to flatten out.

It is truly amazing how long 4 hours can feel at an altitude approaching 4,000 meters! I was relieved when we arrived at Yak Kharka, a charming town adorned in adorable yak illustrations. I splurged and purchased a mushroom pizza for lunch. It was absolutely delicious and certainly the most satisfying meal I had eaten in days. We sat with Jen, the bubbly Australian, for lunch. Every conversation I had with her, I was so struck by her kind heart. She shared the stories from the Medical Talk that we had failed to attend the previous afternoon in Manang.

Jen had the three of us perched on the edge of our seats, hanging onto her every word. In the last month, three trekkers had perished on the mountain due to high altitude sickness. Their stories were tales of recklessness and of foolish attempts to play the superhero.

From Yak Kharka we had only a short ascent ahead of us to Letdar. We had already climbed to 4,020 meters for the day and still had an additional 200 meters to go. Whether I was freaked out from Jen’s stories, too full from my pizza or legitimately suffering symptoms of altitude sickness, I’ll never know, but almost immediately after beginning our post-lunch trek, I felt awful. After reaching upper Yak Kharka, I layed down and bid Cassandra and Trevor a teary goodbye. I couldn’t go on for the day. I felt too weak, too out of breath and too dizzy.

I was being a pansy.

Luckily, we had just run into Maurice, the French Canadian, who suggested I take a short rest and she and her guide would walk me the rest of the way to Letdar in about a half an hour. I wearily agreed, completing zonking out and succumbing to the unfortunate ailments I was experiencing.

After a short rest, Maurice said she was ready to walk. Reluctantly, I joined her. Almost immediately, I realized that my walking pace had been way too fast given our current altitude. I knew I should walk slower, but I didn’t realize just how slow I should be walking. Extremely slow. Ridiculously slow.

I wanted to throw my pack off the mountain and go for a run.

After our slow, short ascent to Letdar, we steadily approached the three acomodations that Letdar had to offer. I could see Trevor sitting in the distance and despite our glacial walking pace, I exclaimed, out of breath, “Is there any room?” Trevor explained that the teahouse was full and himself and Cassandra were slated to sleep on the floor of the kitchen for the evening. After many attempts at requesting to do so with the proprietors, they finally caved and allowed Trevor and Cassandra to crash in the kitchen for the night.

I continued to the last, tiny and extremely basic accommodation. “A room for one?” “Yes, we have one room.” Hallelujiah! The room was simple: nothing except a miniature bed, concrete walls and a ceiling covered in stained, torn paper. Honestly, it looked like a room straight out of a horror movie, but it was a roof over my head, so I was totally grateful.

In the common room, I retreated to a free table and chairs at the back of the room, attempting to fly under the radar and read my book in silence. I imagined, before beginning the circuit, that I would have loads of alone-time every day: quiet, introspective, in the wilderness. This was not the case. I cherished every moment I could carve out for solitude. Sometimes, I even pretended I was reading just to have time to think and reflect on life and our current experiences. And to write.

Inevitably, despite my desired solidarity, an older woman struck up a conversation with me. She was part of a big group of Australians trekking for 7 weeks with tents, cooks and everything they needed to be self sufficient in the most remote areas of the Himalayas. Due to the heavy early snowfall, they were unable to pass into the Mustang region at their desired location, so they were forced to trek with the masses for 2 days on the Annapurna Circuit.

She informed me that this was her fourth time in Nepal. She had traveled on her own when she was a young woman, then had taken her children, her children had gone back on their own and now she was here with her friends.

After declining their multiple offers for beer, I resumed flipping mindlessly through my novel. I soon overheard a single Israeli traveler speaking of his long day travels from Tilicho Lake. I was intrigued. He invited me to look at his photos on his phone. Hight was his name (I’ll be honest, I’ve no clue how to spell his name properly in English, but this is my best phonetic guess).

Handsome and charming, Hight had made an impressively long journey for the day, a journey which people normally accomplish over 2 or 3 days. Hight informed me that he had, “Run most of the way!” Wow!

I soon discover he had been a “warrior” in the Israeli army. Nepal and its mountains are inundated with Israelis fresh from their requisite terms served in the Israeli military. Unlike others I had met, Hight had spent an extra year in the military to save money. He couldn’t quite explain in English what his job had been, but from what I gathered, he was a captain or lieutenant of sorts.

I noticed the background of his phone was a cute picture of an attractive blonde woman kissing his cheek. “Is that your girlfriend?” I inquired, secretly hoping it wasn’t. “No, it’s my mom,” Hight replied without missing a beat. “Do you talk to her often?” I asked harmlessly, legitimately curious if he had been speaking to his family while traveling. I tend to assume that young travelers are distant with their families, estranged somehow. However, I have found this is more true for Americans than other nationalities.

Hight responded apprehensively, “No I don’t talk to her. I’d rather not talk about it.”

Did I let it go? Take the hint? No, of course not. I pushed and pushed until he was forced to tell me, “She died in her sleep two months ago and they don’t know why.”

Foot in mouth. FOOT IN MOUTH!

As soon as the sun went down and darkness descended upon our teahouse, I headed to my tiny room and hunkered down, completing my evening ritual as always: layer upon layer upon layer, zipped up tightly in my sleeping bag, doing my best to think warm thoughts.

Did I mention the toilet was a trek-and-a-half away and I had begun taking altitude acclimatizing meds (which make you have to urinate more often?) Waking up and having to go to the bathroom was a quite traumatizing experience. With the altitude, when you have to go, you really have to go. Problem is, you’re zipped up in the pitch black, with no electricity, groping around helplessly trying to find your headlamp or any source of light and trying to shove your feet in your boots before storming out the door.

“Shit, shit, shit, I need to peeeeeee,” I mutter out loud, grabbing my kindle and furiously turning the brightness up to lead me to the “toilet,” a term we should be used loosely when referring to Nepal. Luckily, the moon was full and bright; I was easily led to the ice cold “toilet.” Relief.

The stars in the Himalayas are truly magnificent. You know when you get a few hours out of the big city to go out for a weekend of camping? You might marvel at how bright the sky is at night without the light pollution disrupting your view of the stars. Imagine that times a million! The first night I was able to see the sky in the mountains of Nepal, I was overcome with childlike excitement.

In fact, I think I danced, laughed and shrieked in delight. 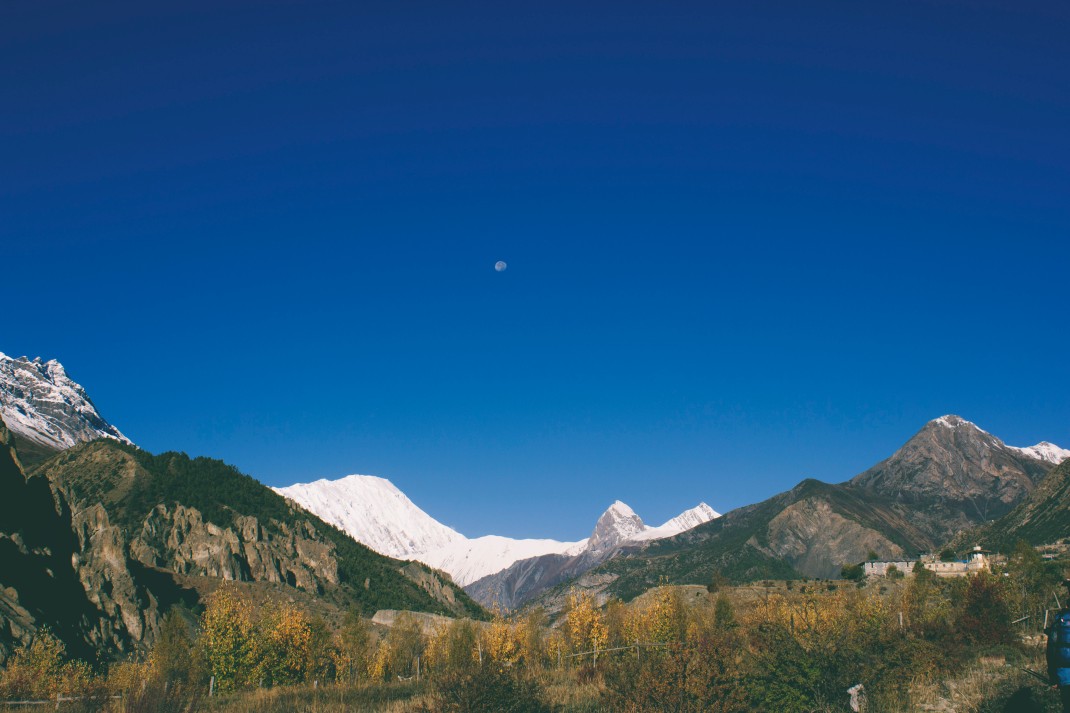 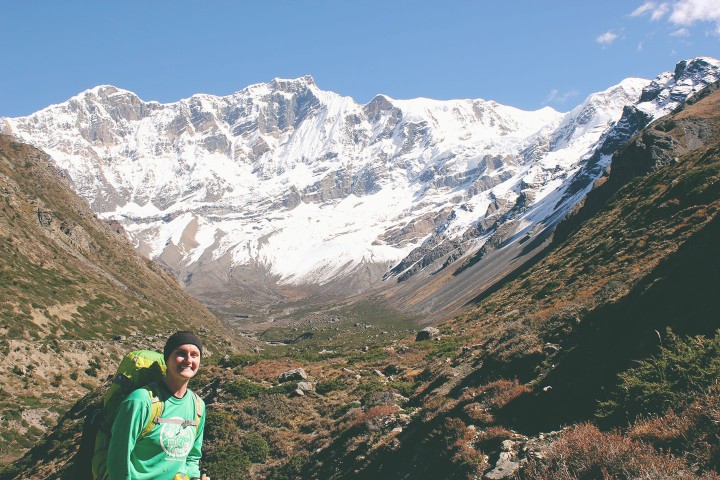 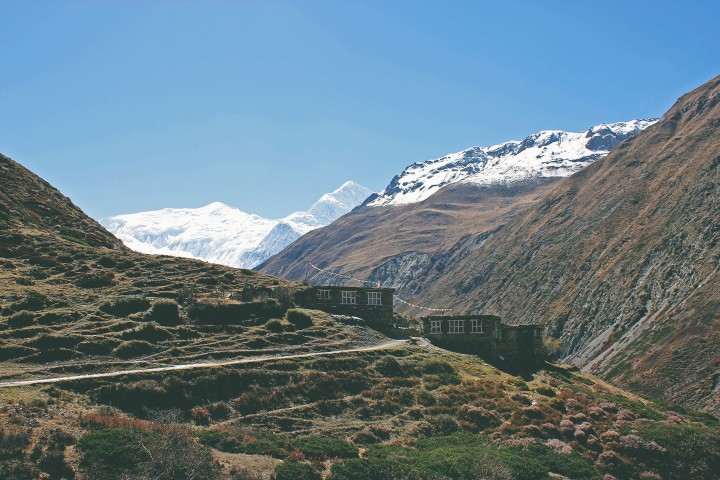