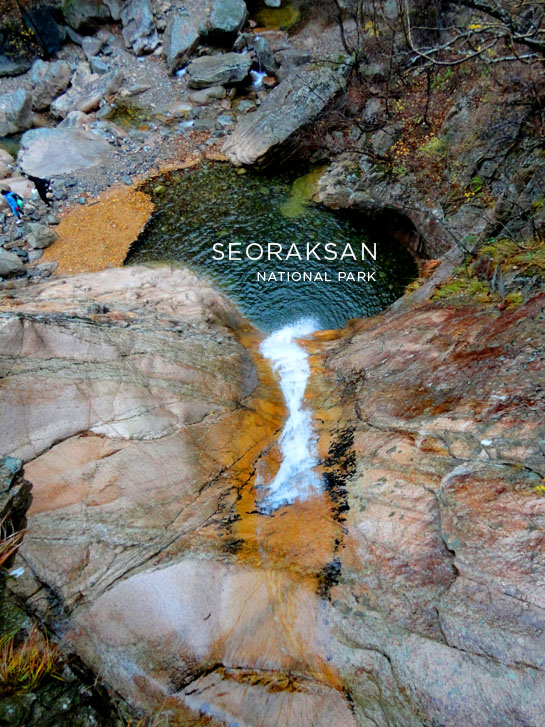 For more photographs from Seoraksan, check out my Flickr.

Picture this. It’s 10 o’clock on a Friday night and you’re a couple of drinks deep. As you help two friends zip up their packs for a weekend of hiking on a beautiful mountain, you begin to regret your decision to back out. It’s going to be too crowded, you keep reminding yourself. But, every bone in your body is screaming “Go, Claire! Go!”

And so… ten minutes before my friends were to depart to catch an overnight bus to Seoraksan National Park, I threw my gold party pants on, grabbed some gear and joined them. Just like that.

After a frantic, running (and I’ll admit, somewhat drunk) commute to the bus stop, we were on the bus at 11:30 pm. We were going on the trip with Seoul Hiking Group, with, as they say, sixty of our closest friends. I attempted to sleep for a few minutes on the bus ride, which was only three and a half hours long. As we neared our destination, I could see the fog creeping in tightly around the bus and my heart raced in anticipation. Upon arrival, everyone scrambled to unload everything off of the bus while simultaneously realizing two things A) Even at the base, it was cold. and B) It was raining.

The leader of our group, Warren, warned us all to tightly strap on our ponchos and waterproof gear, as it would be incredibly cold at the top. We all looked at each other and scoffed. Cold? Rainy? No, problem.

We had no idea what we were in for.

Side note: It was now 3AM and, obviously, pitch black. As the three of us packed only minutes before leaving, we were equipped with no headlamp, no light up shoes… no lighting of any kind.

The energy in the air was frenetic as we broke up into groups of five hikers to stick with for the duration of our adventure. The base of the mountain was teeming with Koreans and other hiking groups. Do not imagine a deserted, lonely mountain here… Appropriately enough, they call Seoraksan a “moving belt” of people.

All of this (unpacking, breaking up into groups) happened within minutes of getting off of the bus. Just like that, we walked through the gates of Seoraksan National Park, attempting to stick with our group through the crowd, and began our trek.

For me, the first hour was one of the hardest of the hike. The first three and a half hours  took us straight up 1,708 meters (or 5,604 feet) to the highest peak of Mt. Seorak, Daechongbong Peak. The hike began climbing up wet rocks and stairs covered in leaves. At a feverish pace, we had no choice but to keep up with the flow of Koreans moving up the mountain, at most times, in a single file. We stopped only briefly to catch our breath or to, foolishly, take off layers. We desperately struggled to catch the light of others’ headlamps to give us a glimpse of where we should put our feet. Mostly, it was keeping your head down, and putting your foot exactly where the person in front of you had, no questions asked. There was no choice but to carry on, all the while, rain pounding in your face, legs on absolute fire and gasping for breath.

When you were lucky enough to have the opportunity to lift your head from staring at the ground, desperately trying to see, you could see a trail of white ponchos and lanterns moving seamlessly up the mountain. The trail of lanterns going up and up and up in the distance was magical, if not disgustingly daunting.

Initially intent on doing a sixteen-hour hike, the first hour left me feeling like I wouldn’t even make it past the first three. Discouraged almost to the point of tears, I just couldn’t believe that we could possibly, physically or mentally, do this for another fifteen hours. It just was not feasible!

After two hours, we ran out of water. Unprepared as we were, we foolishly assumed there would be water at the base and on the initial ascent to the summit. That was a terribly false assumption. Armed with an empty camel back, we were dying. Almost unable to swallow, a fellow hiker, an amazingly kind fellow hiker, gave us a bottle of water. Without that water, I don’t know that we would have made it.

At this point, every single part of us is soaked to the core. Our shoes are heavy with water, every item in our bags is dripping and the temperature is beginning to drop. No time to stop or worry about it, up, up, up.

Three Hours. We begin to have some natural light as the sun begins to rise, although the fog and rain are so thick we can’t see anything. Shortly after the three hour mark, the trees begin to thin out and we think we’ve made it to the top. But the stairs and rocks continue onward, upward.

Reaching the summit was not only miserably cold and absurdly windy, it was also highly anticlimactic. The sky was too thick with clouds to see anything. The summit was a frantic rush of hikers trying to snap a few photos with their frozen hands before dashing to the first shelter. The wind was indescribable. I was sans gloves and, having lost one of our friends a while back and our backpack, sans my sweater and gaiter. I don’t know that I’ve ever been that cold and wet in my whole life.

Ten minutes down and we had arrived at a shelter. The shelter was packed like sardines. Upon entering the shelter, we headed to the basement area. The basement area, which is packed as well, is two rows of huge wooden bunk beds. These wooden planks are covered in wet, exhausted, sleeping bodies and clothes attempting to dry. Luckily, we found a place to set up camp and strip down our sopping clothes. The two hours we spent in the shelter were absolutely miserable. There was not  enough head to warm your wet body. At all. We had no blankets, nothing dry to warm us uo. The shelter had run out of hot water and the only real food we had taken with us was ramen. We attempted to lay down and sleep, our lips blue with the cold.

Somewhere during the ascent, the whole lot of us decided the 16-hour hike in the pouring, freezing rain, was simply not feasible. We wanted to be done as soon as possible. In the shelter, I could overhear members of our Seoul Hiking Group fantasizing about calling a cab, taking a helicopter and various other methods of transportation- just to get  down the mountain as soon as humanly possible.

But, there was no other way.

We knew, lying on the wooden floor, in our wet, cold clothes, that the only, shortest option, was to, at some point, muster up the mental strength to finish the 11-hour hike. Our plan was to wait out the rain as long as possible. However, at 9:30, we were kicked out of the shelter. Absolutely horrified, we put on our gear (ha!) purchased hot coffee cans in an attempt to keep our hands warm and headed out into the tundra.

Once we got started, going down was not nearly as bad as we anticipated. We just had to keep going. We were not going at a fast pace. At. All. Our legs were shot and it was still pouring. The hike was not a path of dirt, it was rocks and stairs. There was a shelter every couple of hours on the way down, where we would stop for a minute or two, before mustering up the strength to continue on. It was painful.

After about three hours of descending, we began to actually be able to see the scenery. While the rain had wiped out most of the changing leaves we had heard so much about, the rocks and the mountain itself were absolutely breathtaking. Unfortunately, due to the rain, I did not have my camera with me. However, we got a few photos with some smaller cameras. I don’t think any camera could do what we saw justice.

On either side of us, the rocks towered above, the fog encasing the uppermost areas of the mountain top. There were boulders piled in the middle of the two slabs of rock, a stream rolling through. We were fortunate enough to see several tumbling waterfalls. All the while, we were climbing down Mt. Seorak, every muscle in our body screaming in pain.

An hour prior to the ticketing gate, where we were to meet up with our group, we found heaven. There was a restaurant. After fourteen hours of hiking, we had found booze. A beer has never tasted so good or felt so deserved. After a jovial beer and meeting some fellow hikers in our group, we walked the last hour together. The last hour consisted of flat, paved, paths, so it was pretty easy peasy.

We hopped on the bus to head to our accommodations feeling exhausted, accomplished and ready for a shower.

Our accommodations were much nicer than we anticipated. We had an entire floor dedicated to the hiking group. Five people to a room. Each room had its own shower, which was a very, very exciting surprise. I could have stayed in that shower all night. Luckily, one of our roommates let me borrow dry clothes, as the clothes I had hiked in were the only clothes I had brought.

Thirty minutes after getting back, we were summoned to dinner. Dinner required us to cook for each other, a communal meal after a long day of hiking. Warren, our fearless leader, had brought the food: meats, veggies, bread, etc, for us to prepare. There was this really cool sense of camaraderie and community. All of us, exhausted and starving, working together to make food for each other, people we didn’t even know 20 hours ago.

After a fantastic sleep, Sunday brought the beach. Moving to Seoul from San Francisco, I couldn’t have anticipated how much I would miss the water, the open space. To make up for our awful weather on Saturday, we were blessed with sun, warmth and waves. We swam, we ate, we drank, we rejoiced.

The bus back to Seoul was an experience. If a norebong is a a karaoke room, a norebus is a karaoke bus, which is exactly was our bus transformed into. Everyone was singing, laughing, it was a fantastic time. Unfortunately, the bus broke down somewhere in between Seoul and Seoraksan and we were delayed about two hours coming back. However, we were with a truly great group of people.

Warren, the wonderful man who runs Seoul Hiking Group, said it best. Yes, the conditions of our hike were truly, truly horrible. But, we will never have an experience like that again. And looking back, we will be proud of ourselves that we did it and had a great time doing it.

Apparently, they do the same hike in the snow in the winter… any takers?